In the era of the 4th industrial revolution, Artificial Intelligence (AI), which has been deeply rooted in our lives as a prerequisite for a “better life,” has developed through numerous stages to arrive where we are today.

When it comes to Artificial Intelligence, many people still wonder what it is. Most people want to know AI, but they think that they hardly have any contact with it in their daily life. So, in the “Live with AIs” series, I want to let you know about AI in an easier way.

Now, shall we introduce some development stages and terminology that's easy for even those who are least familiar with AI?

What is Artificial Intelligence? 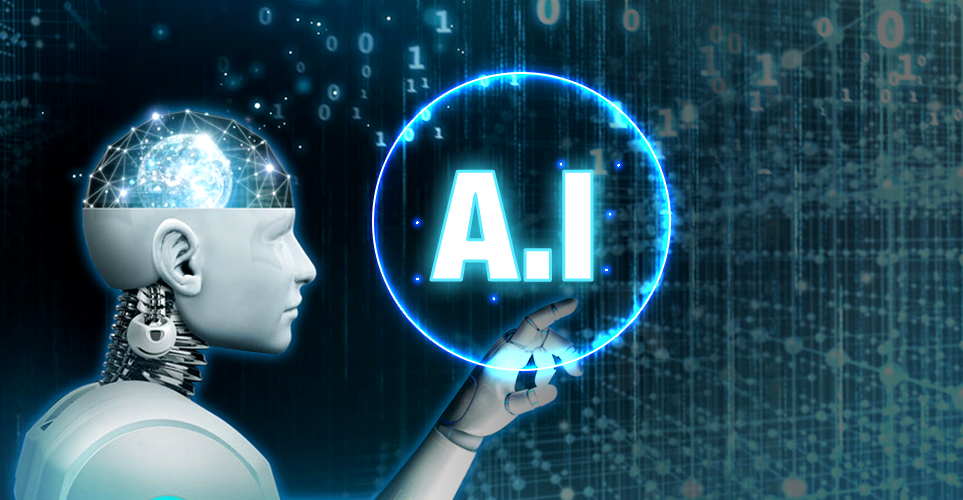 Although there are various opinions regarding the exact definition of AI, an AI appeared for the first time in a computer science workshop at Dartmouth College in the United States in 1956. John McCarthy, who used AI for the first time, defined artificial intelligence like this: "Every aspect of learning or any other feature of intelligence can in principle be so precisely described that a machine can be made to simulate it." 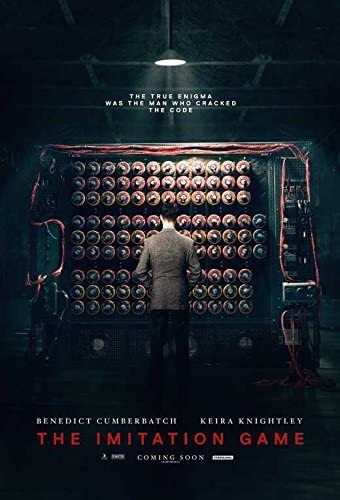 The movie, “The Imitation Game," depicts the biography of Alan Turing who came up with the idea of artificial intelligence,
source: Amazon

It was thought that the AI, which began in this way, could solve many problems if it could be programmed by accurately describing only basic principles, such as solving puzzles or games. One example is that Alan Turing, in the movie "The Imitation Game", found a way to solve the encrypted messages sent by the Germans using the Enigma machine. In addition, algorithms such as the Tower of Hanoi and Maze Search have been studied. 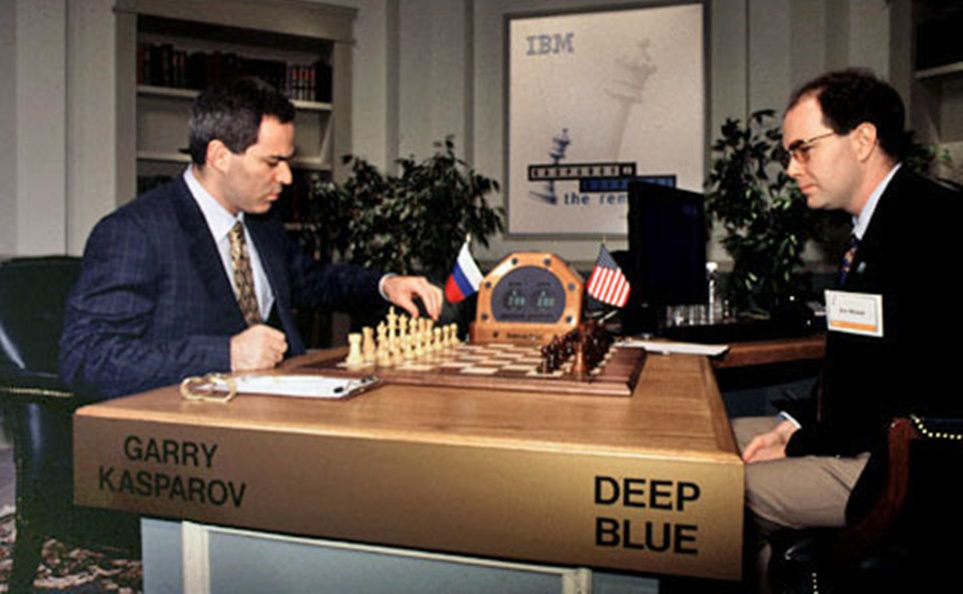 After continuing to develop this method, IBM's Deep Blue artificial intelligence technology finally won a chess game against a human master in 1997. But as the limitations of early AI technology with problem-solving were revealed, the illusion of AI was broken, and AI developers encountered their first hurdle.

In the 1980s, many people felt that there was a limit to programming basic principles and attempted to program human intelligence itself.

The expert system can be defined as a system designed to equip the same problem-solving ability as a human expert through advanced knowledge, experience, know-how, and so on by making the rules of knowledge that experts possess like “Naver Knowledge iN” and thereby implementing them as program codes.

This is a system that reflects the probability values in the rules as the expert opinions may differ - even the opinions of one person may differ depending on a situation. LG Electronics has developed artificial intelligence technologies such as Fuzzy and Chaos using the expert system.

The Goldstar Chaos air conditioner based on chaos theory (1994)

LG Electronics has been trying to provide convenience to customers by applying these AI technologies to various products since the early stage of AI development.

However, the technology to program expert knowledge is only possible over a long period of time, with a team comprised of experts and programmers plus coordinators who understand these experts and can communicate their knowledge to the programmers. Due to these limitations, the expert system was not used much, and AI technology entered its second winter.

“Machine Learning” is one method of implementing AI that began in the 2000s. It analyzes big data and draws conclusions based on the results of the analysis. 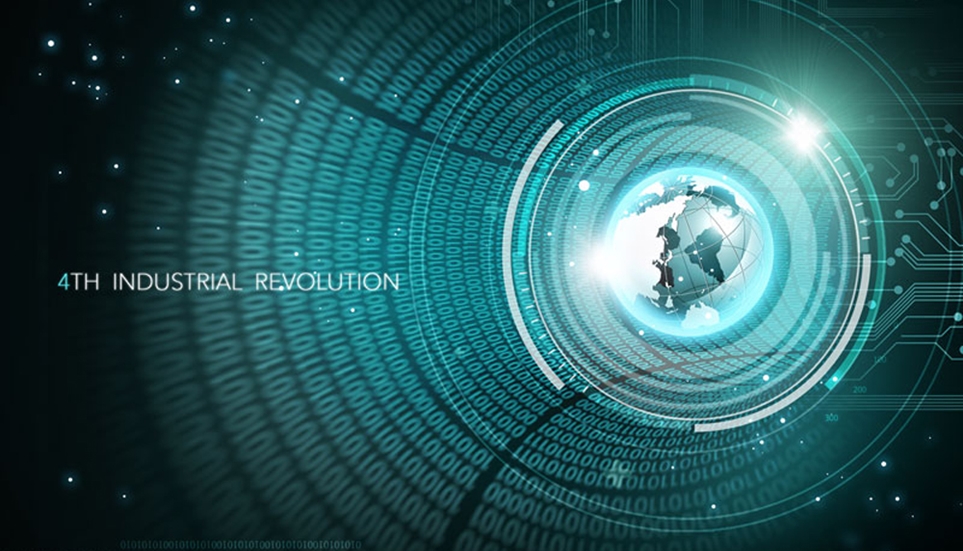 As computer systems have steadily evolved regardless of artificial intelligence technology, a vast amount of data has been generated in the course of developing or operating systems. In the meantime, AI developers began to think about how to implement simple, human-level intelligence from data even when it's not high-level expert knowledge. They considered ways to make calculations from data to the correct answer form human thoughts, making a correction to reduce the errors between the output of the calculations and the correct answer and repeating this process, thereby making it similar to human thoughts.

This process is called “training”, and the technology to apply the intelligence obtained as a result of training is called “Machine Learning”.

In general, there are two types of machine learning methods:

Step 1. Extract the features of training data that a person has seen to determine the correct answer.

Step 2. Determine the correct answer based on various features. 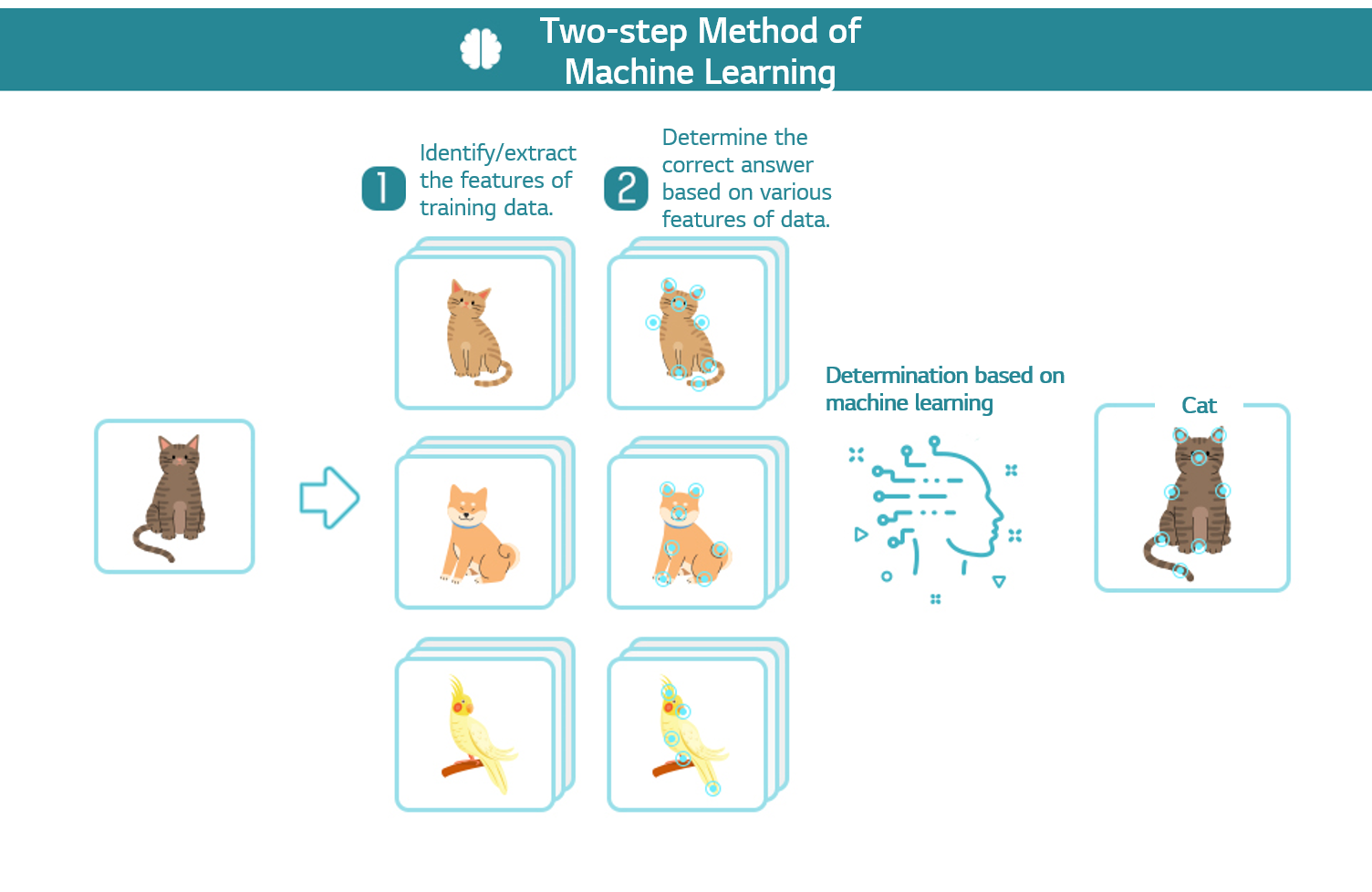 For example, in the case of judging a cat, in Step 1, it extracts features such as the face shape, the number of legs, the number of eyes, the geometric structure of the eyes, nose, and mouth, and the shape of the ears. In Step 2, it then judges that it is a “Cat” based on features such as the round face shape, four legs, two eyes, a triangular structure of eyes, noses, and mouth, etc. 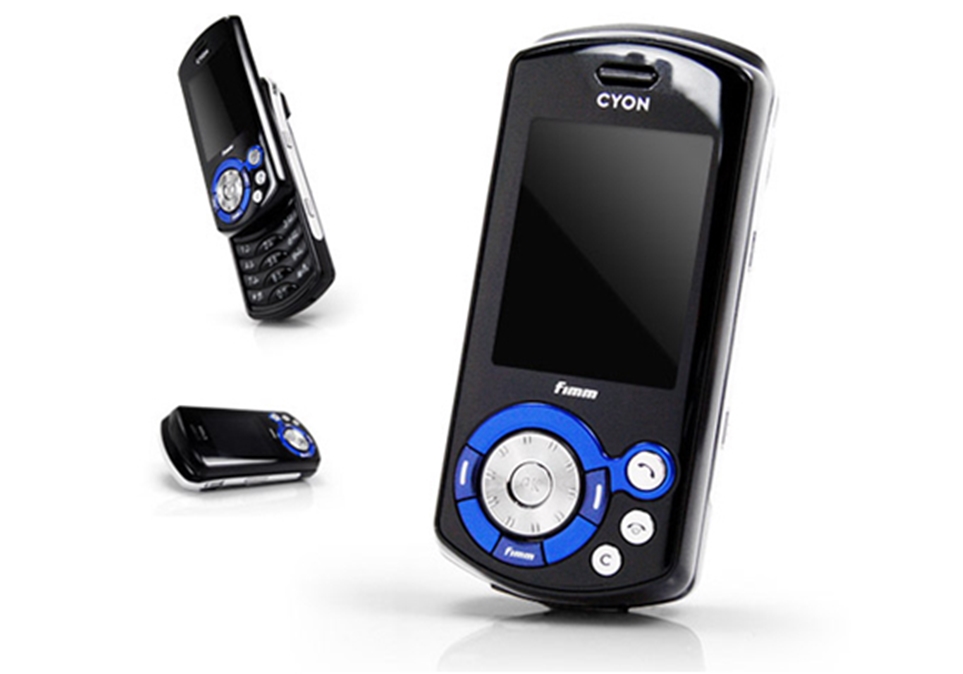 “Deep Learning,” which has been growing rapidly since 2010, is a method of machine learning that enhances computer intelligence to a higher level.

The basic principle of deep learning was developed in the 1980s. Deep learning uses an Artificial Neural Network (ANN), which is a method similar to the network structure of human brain cells among many methods of machine learning. 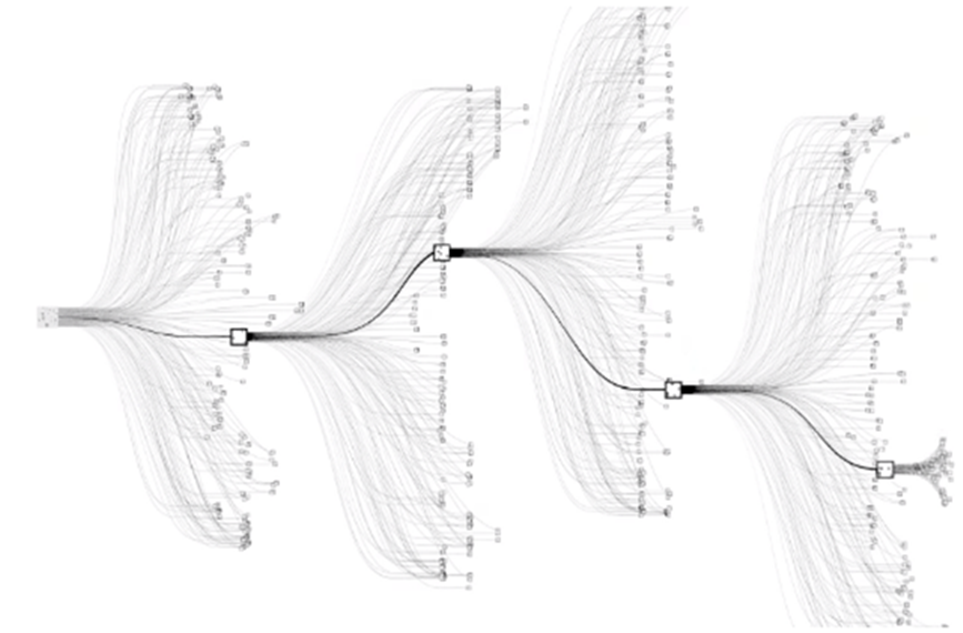 At the time, however, it was difficult to apply as it required enormous quantities of data and of calculations to process the data. In the meantime, as the game industry developed in the 2010s, GPU, hardware capable of quickly performing simple calculations for smooth gaming, was released, and it was also capable of performing complex calculations in the AI field as well. Along with this, new calculation methods that improve performance from a technical point of view have been researched and developed even faster. 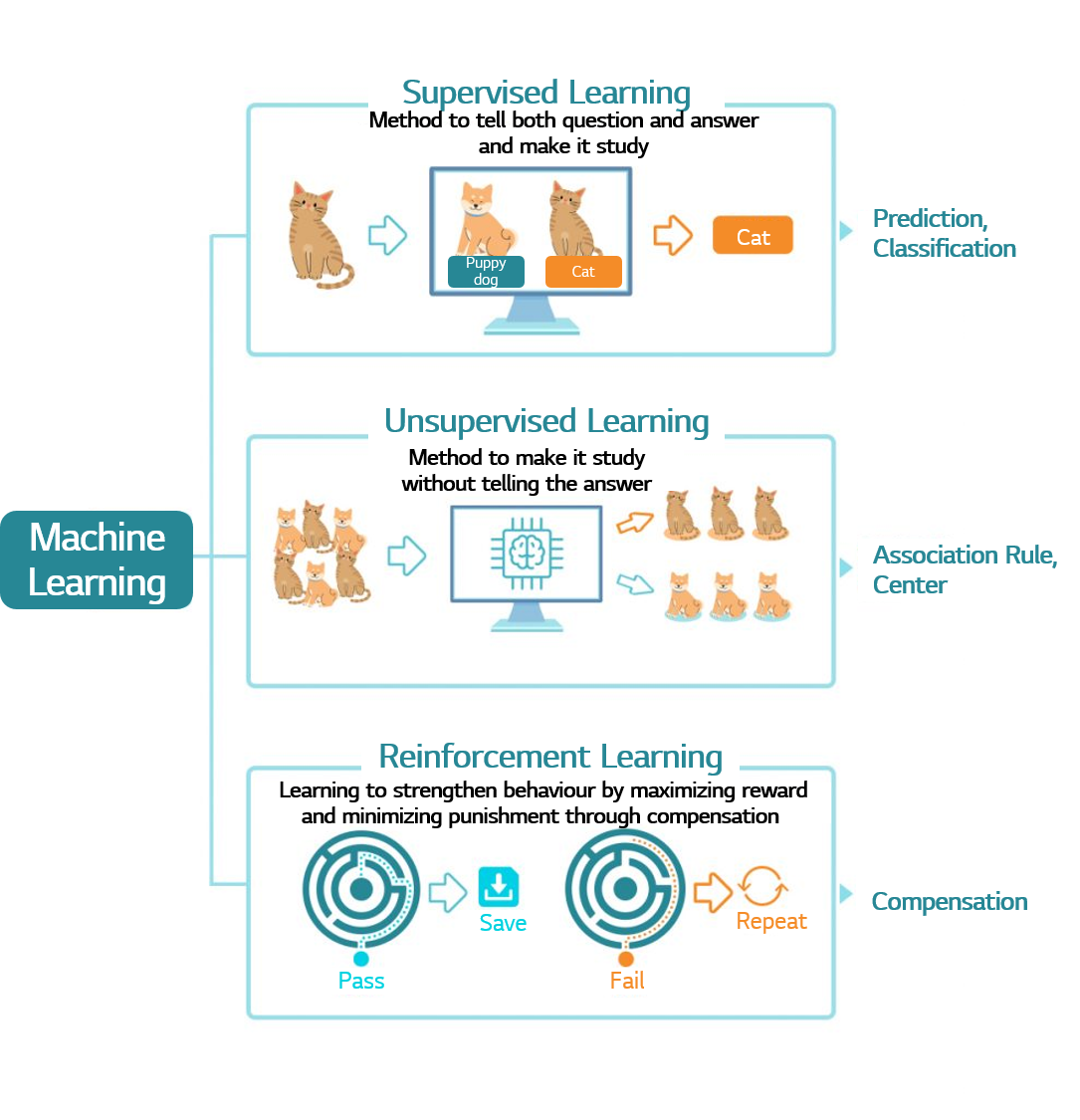 : Learning method to make a cluster by distinguishing similar things from other things without knowing the correct answer

As a person grows, even if he or she does not know the correct answer, he or she has the intelligence to gather similar data and build a cluster. As a child grows up, the child can distinguish that the first toy given to it is different from the mother's cosmetics or delicious food, and the child can recognize the mother's voice even if it hears many people speak.

Recently, there are many technologies that mix supervised with unsupervised learning to infer the correct answer from the data, and this is called Semi-Supervised Learning. The principle is that, after learning a cluster, if only some of the data in the cluster are given with a correct answer by a person, the AI can see the entire cluster as an answer given by a person.

: Method to learn for oneself through multiple rounds of trial and error with rewards and penalties

There are some things that are difficult to give the correct answer to, even with a mother present. For example, how a child stands up on their own and how they walk on their own. As a child falls over, the child learns a method suitable for themselves by trial and error. There are two ways for trial-and-error learning to work. They are either finding the most suitable method from those already found up to now or trying a new method. To stand up and walk, the child tries the most suitable method from all those they have ever done or tries a new method to find a way that suits themselves more.

Unlike existing supervised and unsupervised learning, the subsequent data that reflects rewards and penalties is required. So it is necessary to learn while making data via repeated trials. In general, as it takes a lot of learning time, the limitation of this learning time is being overcome via rapid repeats based on computer simulation. 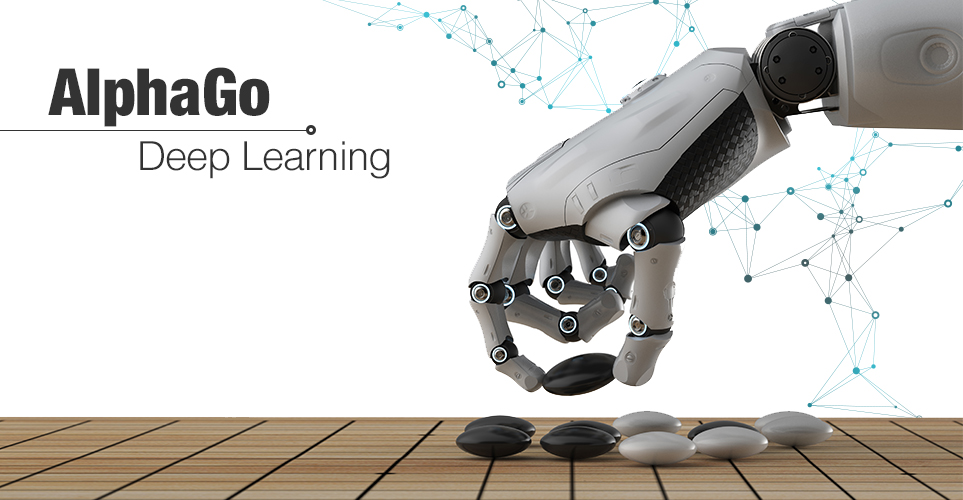 DeepMind's AlphaGo that beat Se-dol Lee, a Korean Go player, is a representative example of applying Reinforcement Learning. This is a way to improve the skill through much more experience than humans by repeating a process where the two play Go in a simulation, the learning results of the winner are copied, and the two play Go again.

The relationship between these artificial intelligence technologies can be shown as follows: 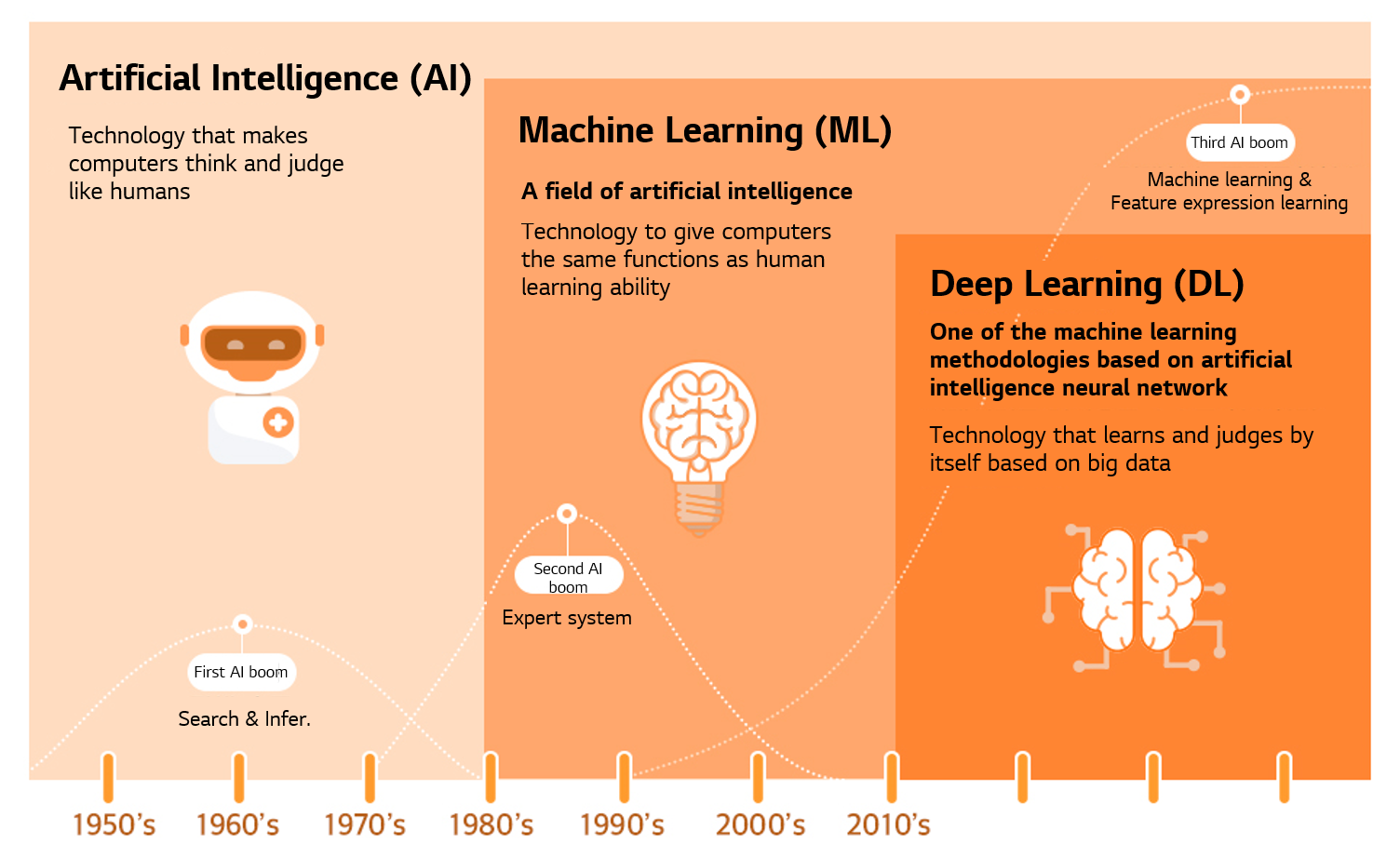 Artificial intelligence that has evolved over a long time and is now familiar in our lives. Aren’t you eager to find out what our future can be with AI?

Next time, we'll look at the various technologies and artificial intelligence products that we encounter in daily life. 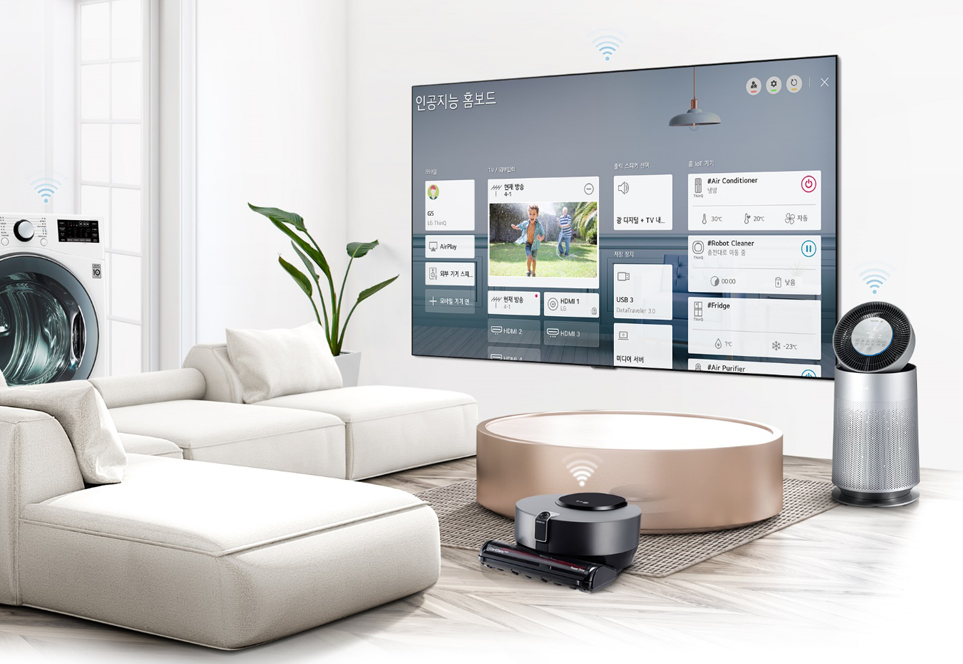